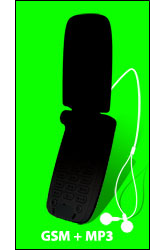 At least one analyst is expecting 2005 to be the year that mobile phones with MP3 playback become mainstream. MP3 ringtones are not an uncommon feature today, but handsets with quality playback for more than a ringtone is few and far between (including an actual headphones jack would do wonders for most phones).

Korean phone makers like No. 2 Samsung and LG are expected to introduce music phones in the U.S. in the coming months. And handset king Nokia, which has dabbled in MP3 phones, recently partnered with music software developer Loudeye, signaling a bigger push toward tunes.

Apple is expected to show off its Motorola-ized version of iTunes at MacWorld in January, but in typical Apple style, not much else is known.